How to Make a Fanbase with Video

This past weekend a new football league – the XFL- launched.  Now, I’m not an avid football fan but I was curious how a startup like the XFL would pitch itself and build it’s fanbase – in contrast to the well established NFL.  What I found is that they’re spending millions of dollars to build an avid fanbase using a well-established formula but applied in a new way with video.

Why would someone start another football league?  The answer to that is pretty straightforward -$$$MONEY$$$. But, in order to understand where the money comes from, it’s important to know what the actual business is.

If I asked you what the business of the NFL is, what would you say?
Football right?

But that answer is WRONG.

The NFL made over $8 Billion US in 2019.  MOST of that money came from two places. TV Deals (broadcasting the games & commercials) and Merch (Hats, shirts, underwear, sheets, mugs, foam fingers) – basically stuff that I call laundry.   WAY below that, in third place, is ticket sales.  Knowing these numbers helps us redefine the business model for the NFL.

The NFL is in the business of video advertising and selling merchandise.  It is, easily, a way to attract a large group of people for a longer period of time so that advertisers can get their content in front of attentive viewers.  Not a great feeling if you’re a player but it is the truth.  But this is the NFL.  What about the newly launched XFL?

It is pretty clear that the XFL is after a similar demographic as the NFL but it is defining itself a bit differently.  It is using video, audio, and other media with a clear focus on immersing fans into the game more than the NFL.

There is a leaning toward trying to portray the game as more of a video game for the viewer than the NFL.  In short, the XFL is faster, has more open access to fans, and openly embraces a younger faster game-style format.  Let’s break that down a bit!

What is the Fanbase-Making Formula?

The XFL knows it will be compared to its competitor the NFL.  Sound familiar for your business?

SO, they’re choosing to use their cameras in ways that will make them stand out.

I really feel they’ve taken an early shot at making the XFL feel like it is being displayed on a game console.  Their cameras are all over the place and it is such a good innovation in shooting this sport.

BASICALLY, THEY’RE TRYING TO PUT THE USER IN THE EXPERIENCE as much as possible.

It’s as if they’re asking, “Where’s the action?  Let’s have a camera there”.

They have the Skycams (like the NFL) but they’re using them more and with faster movement.  The faster movement will keep viewers’ attention and make it feel more like a PS4 game.

They have camera people all over the field.  ALL the time. This offers perspectives on the game that we’ve not seen on TV before – unless gameplay is over.  Should we place bets on how many games it will be before a camera operator is accidentally leveled by a player?  Just check out these shots. 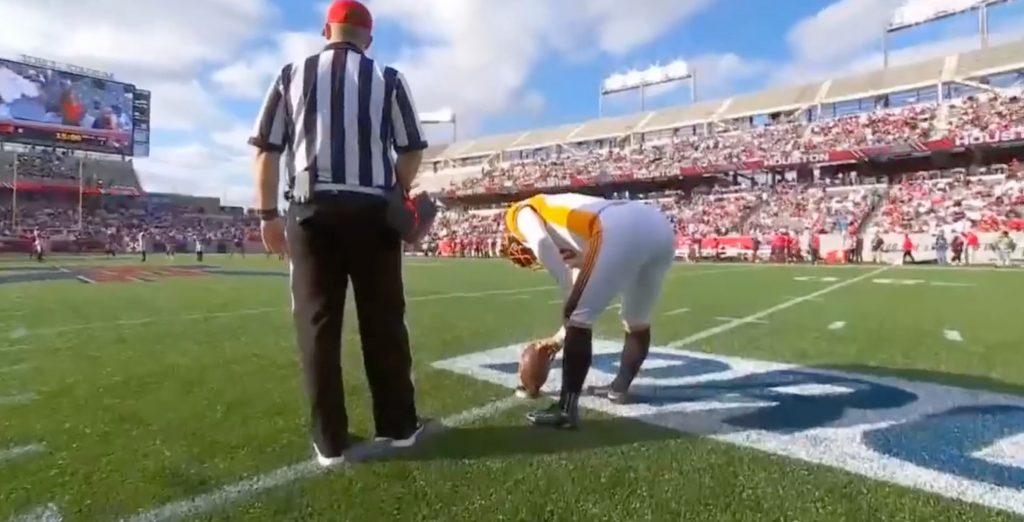 This is right on the field.  A first-person view of the game.  Is there a way to offer a POV of your business to your fanbase? 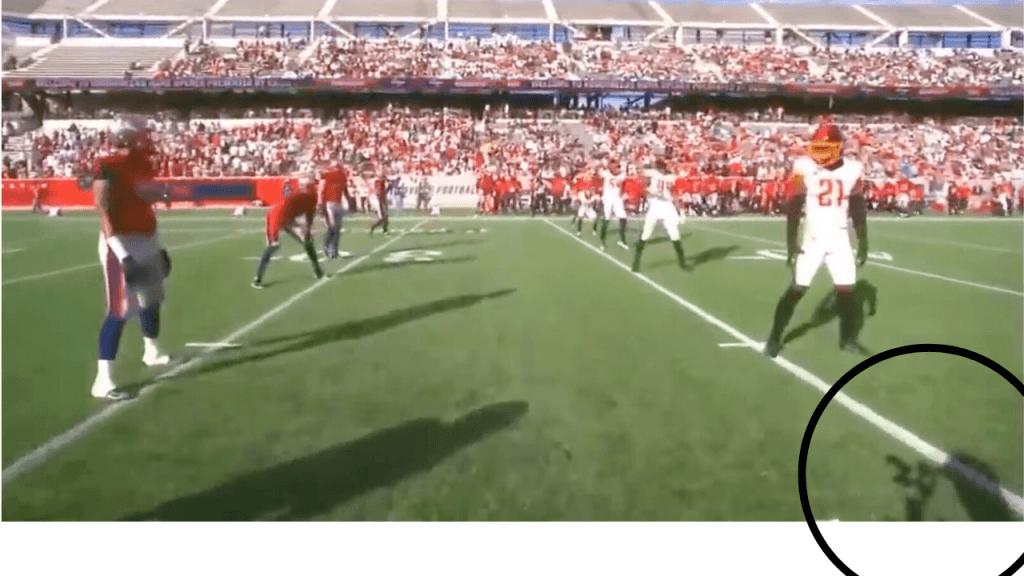 I circled the camera operator’s shadow.  The camera ran between the players before the play.  How can we give our fanbase an up-close view of the action? 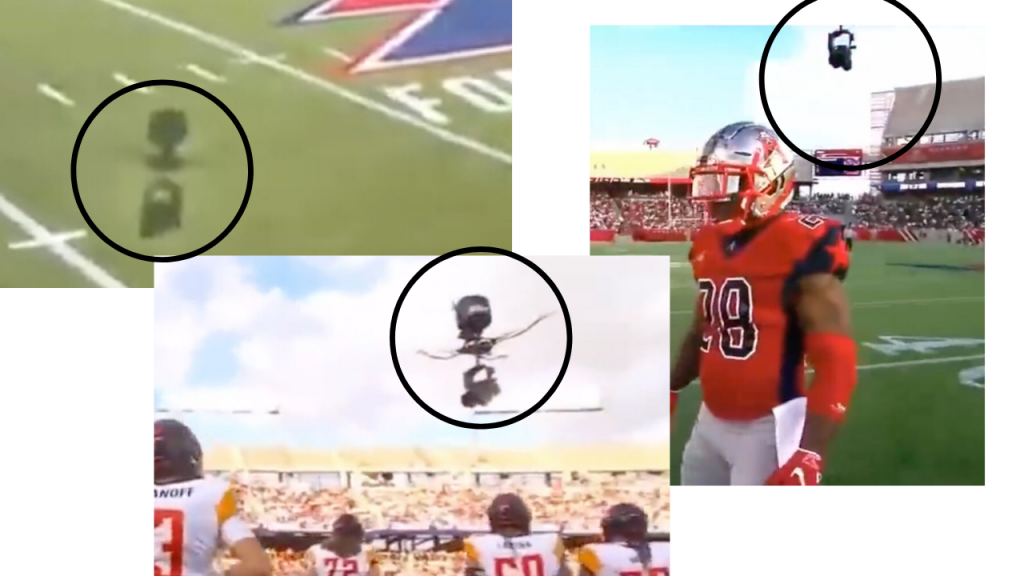 The SkyCam was everywhere.  Shooting something from multiple angles helps to keep the viewer’s attention longer and gives you time to build that fanbase!

SO, the net effect is that I, as the viewer, feel more involved in the game.  I feel part of something bigger than myself.  I feel closer to the players.  Isn’t that what we want as a business?  A connected and loyal fanbase?

How can your viewers be more involved in what you’re doing?  Think about the angles and distances you shoot your pictures and videos.  Is there a way to get a more unique perspective? I have a future post and resource for you on this topic.

Behind the Scenes – Audio

Another innovation that the XFL is bringing to the fans is behind the scenes audio. Live audio conversations are broadcast between players on the sidelines & in the huddle.  It offers more perspective on the mindset of the team, what their focus is, what they are trying to accomplish.  Couldn’t LIVE video & audio help our fanbase?

Have you ever read a book and then watched the movie and felt let down by the movie?  Often that’s because the internal dialogue of the characters is missing in the movie but is so rich in the book.

By broadcasting live audio from the teams, it opens up the internal dialogue of the game to fans for the first time.  It makes it more interesting.  Here are some examples.

Fans can listen to a coach is communicating a play to his player.  Couldn’t we share some of the tips we give our employees with our fans? 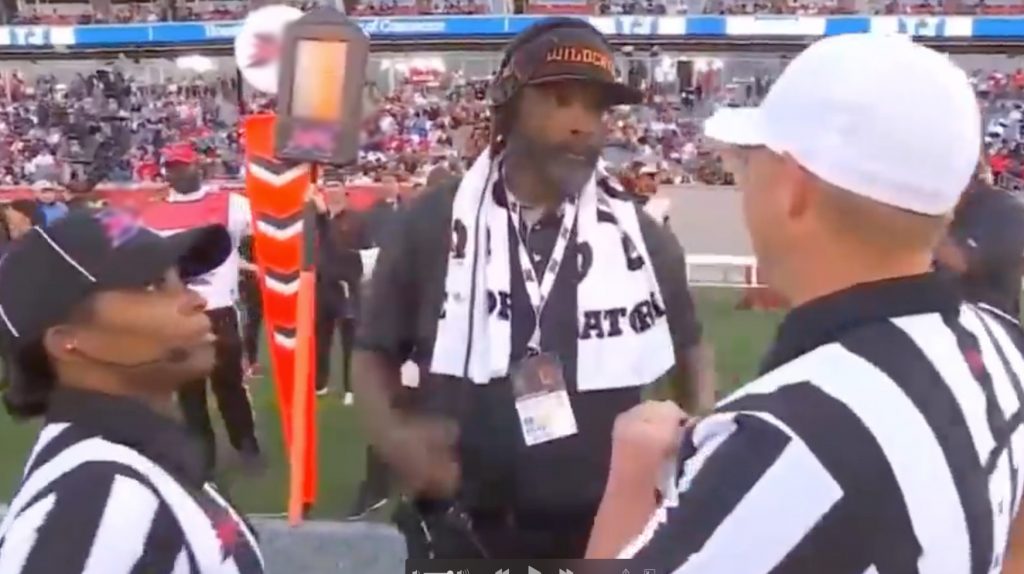 Here the coach is communicating with the referees.  What if we shared thoughts from our interactions with our suppliers, outside sales, and other fans in a podcast or video?

Opening our inner-business-dialogue helps our fans bond with us, our purpose, and ultimately gives our fans more than they thought they’d ever get with our businesses.  But there are other ways to share.

Behind the Scenes – Video

For the XFL, another behind the scenes offering is in officiating.  When a replay is needed, we see and hear conversations between the officials on the field and in the review booth.  We hear them think through a call.  We see both people on camera having a discussion as they solve a problem.

In other sports, fans hate on the officials.  I’m not sure that the XFL is going to change that but this “insider” video does offer a new perspective on how the game works.  It is more possible for fans to have empathy for the officials.

Like the wizard of oz behind the curtain, we can now see how it works.  It makes it seem fairer.  Is there a place you can pull back the curtain on your business and let your fans see how it works?  Maybe a good place to start, like the XFL has done, is with a pain-point that your fans have.  Empathy goes a long way.

Ultimately, raving fans are not just intellectually linked to a business.  An avid fanbase is emotionally involved.

One of the best pieces of advice I have had in my career, as a filmmaker, came in 2002 when a wedding photographer told me that he liked to take pictures of the newly married couple right after they walk the isle out of a wedding.  He does it because of the raw emotion on display. It’s an action-first approach.

The XFL is taking a similar approach.  When there is a victory, there is an immediate interview (while gameplay continues).  Coaches and players are interviewed on the spot and in-the-moment. This captures their immediate emotion of victory or loss at a good or bad play.

This is what a quarterback looks like right after throwing a touchdown.  Where are your touchdowns? How can your business share more emotion with your fans with video?

It is rare for a single person to step out of the normal way of behaving. Let’s be honest, usually, the first person to do something looks like a total lunatic.  But if a second person joins them then we flip it and view the first person as a leader…almost immediately.

The XFL is hitting the ground running when it comes to showing raving fans.  Fans are all decked out in their team’s merch enthusiastically screaming for their teams.  As I watched this, I wondered. Where did these people come from?

I’m sure there is a percentage of the population that will go ape over a brand new team in their town but a whole stadium?

My cynical side tells me that the XFL handed out free merch to everyone and then tapped the beer kegs 3 hours before the game started.  Maybe I’m right, maybe I’m not. That doesn’t really matter.  The effect seems genuine.  These people are excited to have the XFL in their stadium.

What does matter is that the XFL is putting fans, in their merch, on-screen as proof that we viewers are not the first to join the fanbase. It seems socially acceptable to be a fan right?

The XFL is providing social proof that the league is fun by giving airtime (the most valuable part of their business model) to cheering for their fans.

SO, there you go.  We’ve ripped back the curtain on how the XFL is trying to make raving fans and how you can too.

The formula is pretty straightforward:

This might seem frightening.  I have a post that I’m working on that will help you put those fears in context and make them work for you in a way that builds your brand and raving fanbase.

PS – If you need a kickstart making your fanbase with video, hit me up!