I just got back from shooting a video of ASMR tips to help you learn how I make ASMR videos with headphones.  You see it’s still winter in North Idaho.  And it’s COLD!  That makes for squeaky snow.  Squeaky snow can get the ASMR enthusiast pretty stoked.  So let me break down what I did.

What Does ASMR Mean?

ASMR audio:
“Autonomous sensory meridian response (ASMR) is a calming, pleasurable feeling often accompanied by a tingling sensation. This tingle is said to originate in a person’s head and spread to the spine (and sometimes the limbs) in response to stimulation. The stimuli that trigger ASMR vary from person to person. Some of the most common ones include whispers, white noise, lip-smacking, having a person’s complete attention (as in having one’s hair cut by a hairdresser), as well as brushing, chewing, tapping, scratching, and crinkling.”

Basically, it is a sound or visual that gives a person the goosebumps.

Over the past 5 years, Google Trends data shows interest in ASMR has grown substantially.  It seems unlikely to go away anytime soon.

As a filmmaker, it is always the goal to make some sort of impact on the viewer.  Perhaps it is for creative expression or a commercial purpose.  Either way, a lasting effect is always desirable.

ASMR bridges the gap between what is on the screen and in the speakers to prompt a biological response in the viewer.  This makes an ASMR production more memorable.  This sort of media has a ton of commercial and therapeutic potential beyond its current use.

Why ASMR Sounds Matter to a Filmmaker

I’m not one of those people who get ASMR when listening to a trigger sound. Yet, as a filmmaker, I see the value in them.  Learning how to record ASMR videos requires one to really understand audio settings on their equipment.

Think of the last concert you watched on TV or the last movie you saw.  Did the audio in that film change the way you experienced it?  Of course, it did!  In fact, I’d say that the audio probably drives most of the experience and story in a film.

For my snowshoe adventure, I wanted to put the viewer into the shoes to hear the real-life sound of tramping through the snow.  This required accuracy of sound and the look of walking on snowshoes in my visual capture.

ASMR Tips: What really matters is that you find and isolate a specific sound and then place that sound exactly where it is desired for the maximum effect.  This is film production basics here.

Any recording, video or audio, will only be as good as the performance.  The overused idea, “I’ll fix it in post-production” is the fastest way to fail at making an ASMR video.  It is important to do everything possible to get the best possible shot and an original audio sample.

In the snowshoe ASMR, I found a remote location -away from traffic and other noises and an open area with about 6 inches of snow but not 2 feet.  I didn’t want to start breathing too hard and interject my own noises and keeping a camera steady while in deep snow on snowshoes is difficult (see my previous post where I tried that!). 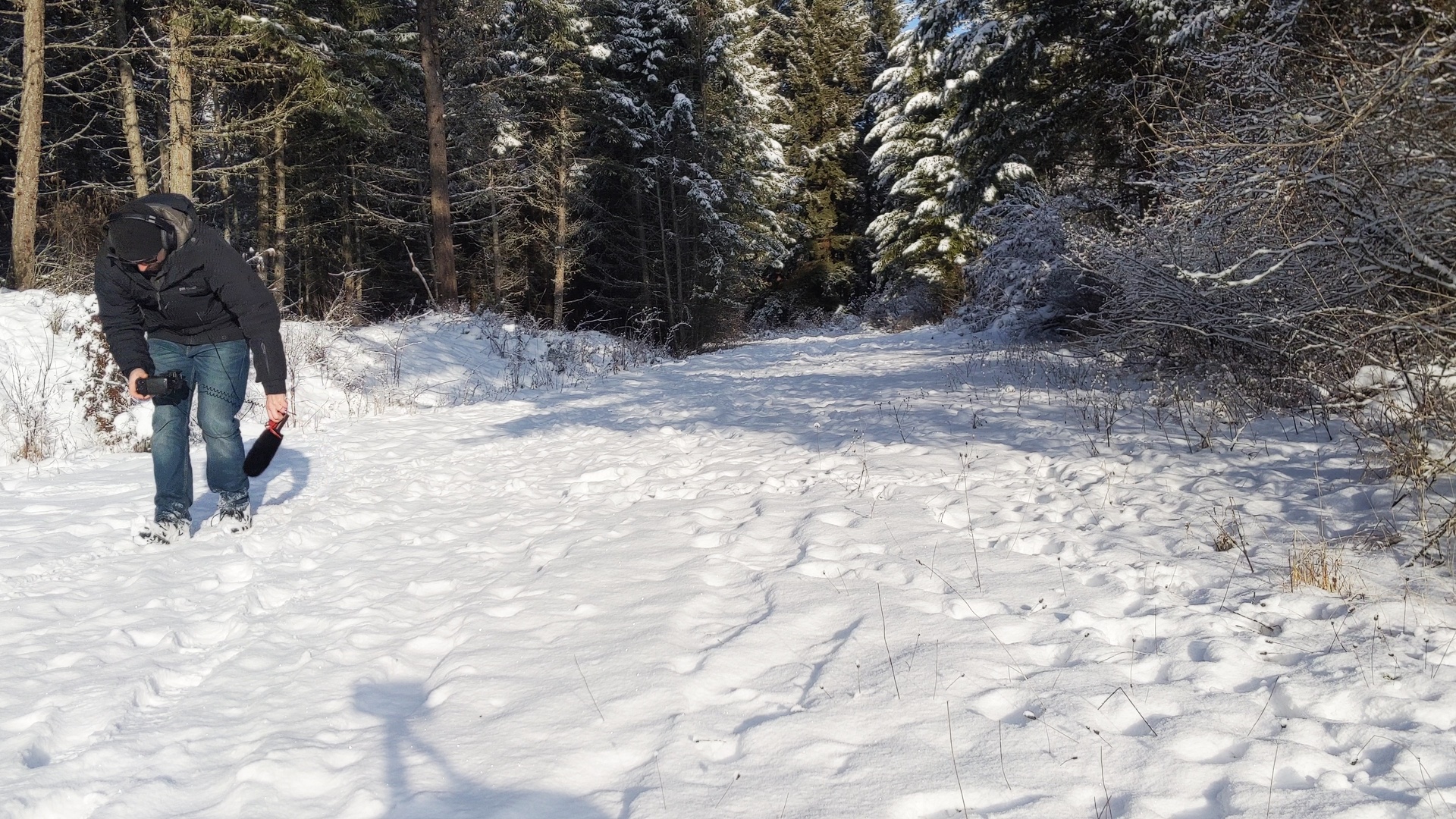 The Most Important Piece of ASMR Equipment for Beginners and Experts

A novice filmmaker can learn how to make successful ASRM videos using only a smartphone.  BUT, there is a key to using all of the possible pieces of gear.

The most important part of your ASMR equipment kit is your own eyes and ears.  The impulse for a beginner, and maybe even an experienced, filmmaker is to grab the gear and just start capturing video and audio.  But really awesome ASMR videos are carefully made.

What other noises are there in your environment?

Background noise like appliances, street noises, aircraft, emergency vehicles, coughs, and sneezes can ruin a good recording.  Minimize these issues by turning appliances off, choosing a quiet time of day, and a good location.

What direction is the desired noise coming from?

Important ASMR tips: How you place your microphone is critical.

Remember, “Proximity is Power”.  Use headphones when you place your microphone to make sure you get it in just the right spot.  When I shot the Snowshoe ASMR video, I wore headphones the entire time.  This is why I quickly took the microphone off of the camera and held the mount in my hand to get the mic closer to the sound of the snowshoes on the snow.

Are there any reflective surfaces around that can bounce undesired sounds into your recording area?

Reflective walls or surfaces can direct undesirable sounds into the microphone. If recording outdoors, the reflection could come from a stationary vehicle, side of a building, or a retaining wall.  A good rule of thumb is to cover surfaces that could reflect sound.  If it is too large, as in the case of a building, hang a moving blanket between the microphone and the building to prevent as much reflected audio pollution as possible.  I love moving blankets for isolating sound and light.

Once you’ve taken stock of your location with your most important piece of ASMR equipment, your ears and eyes, then you can break out your gear.

Back to the cell phone option.

How to Record ASMR Sounds

Isolation of sound will determine the best equipment for the job.

I have a mantra that I tell my clients and film students, “When it comes to good audio, Proximity is Power.”  Basically, the closer the microphone can be to the source audio, the better your ASMR sample will be. So what are those options? 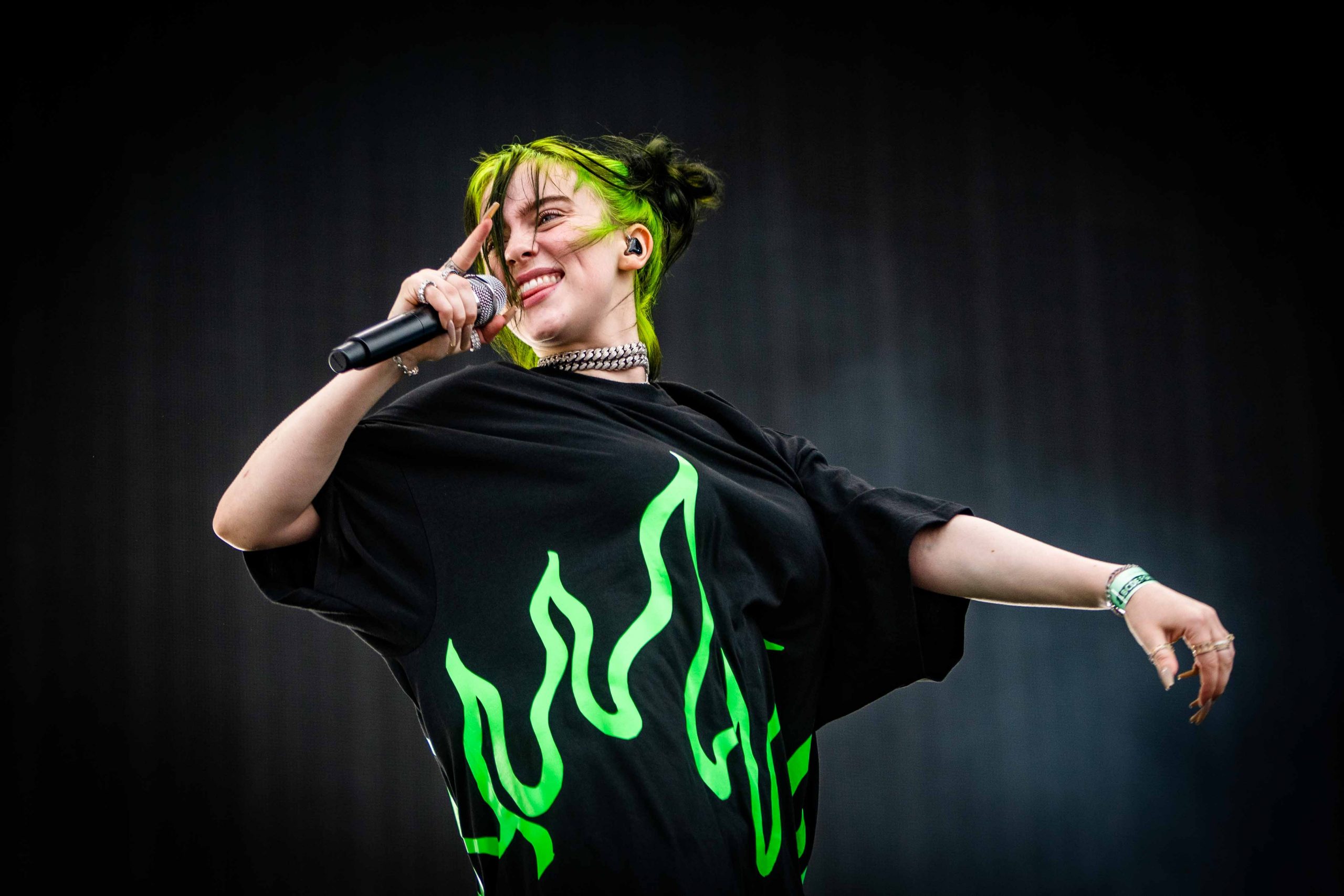 Sound isolation is possible with a cell phone.  Billie Eilish’s song “Bad Guy” features sampled audio from an Australian crosswalk sound that was originally captured on a cell phone.  It is possible – under the right conditions.  Since the microphone in a cell phone picks up sound from all directions, it is easier to focus the sound by wrapping the phone in a towel or other sound deadening material.  Then get the mic as close as possible to the source of the sound.  Again, this isn’t ideal but hey, 5 Grammys for Billie Eilish says it is worth trying. 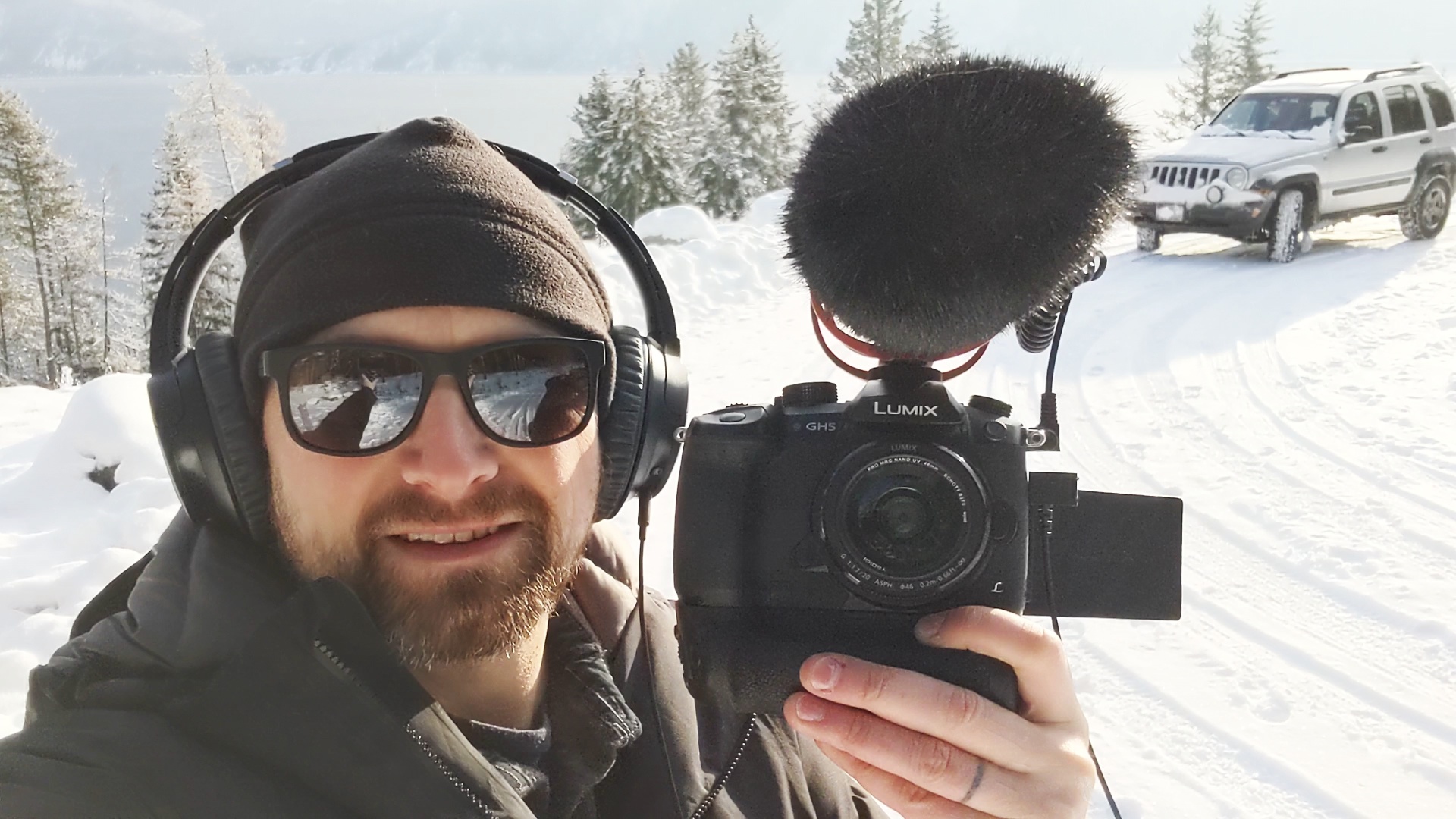 Ideally, you get your ASMR audio with a video mic.  These are usually directional and naturally isolate sounds.  There is a massive spectrum of these microphones to use.  For my snowshow ASMR tips video, I used the Rode Videomic Pro.  It’s a decent microphone for the beginning to the average filmmaker.  There are a host of other directional mics out there too but for video, this is a good place to start.

How to Record ASMR Video

ASMR Video, like its audio counterpart, has a visual beauty or attraction to it that is satisfying for the viewer to watch.  The shot needs to be interesting over time.  This is different from a typical video where there are multiple shots -from drones to close-ups and everything inbetween.

ASMR Tips: What you want here is one continuous shot that is visually just as appetizing as the audio.  Think 30 – 60 seconds or longer.

Admittedly, I feel that the audio from the Snowshoe ASMR shoot was stronger than the video.  Certainly, the video has nice contrast of color and movement but I don’t think it is as interesting as the audio.  It is hard to shoot steady footage in snowshoes – I’ll keep practicing.

ASMR Tips: Get the microphone as close as possible to the sound BUT keep it out of frame too.  There’s a balance to strike here.

How to Edit an ASMR Video

Editing the final product is the last place to get lazy.  If you did it right, your actual sounds are as clean as possible and your visual can hold attention for an extended period of time.

The audio will probably need some cleaning up.  I typically use a low-level noise filter and an EQ tool.  The noise filter takes out any noise from the microphone itself and the surrounding environment.  I wear headphones and usually mess around with the EQ until I find the best frequencies to bring up and the best to push down for the best sounding experience.

In the case of the snowshoe ASMR video, I wanted as realistic as possible sound.  I dropped the low frequencies and emphasized the mid-levels to get that fresh crisp crunch of snow under the snowshoe. 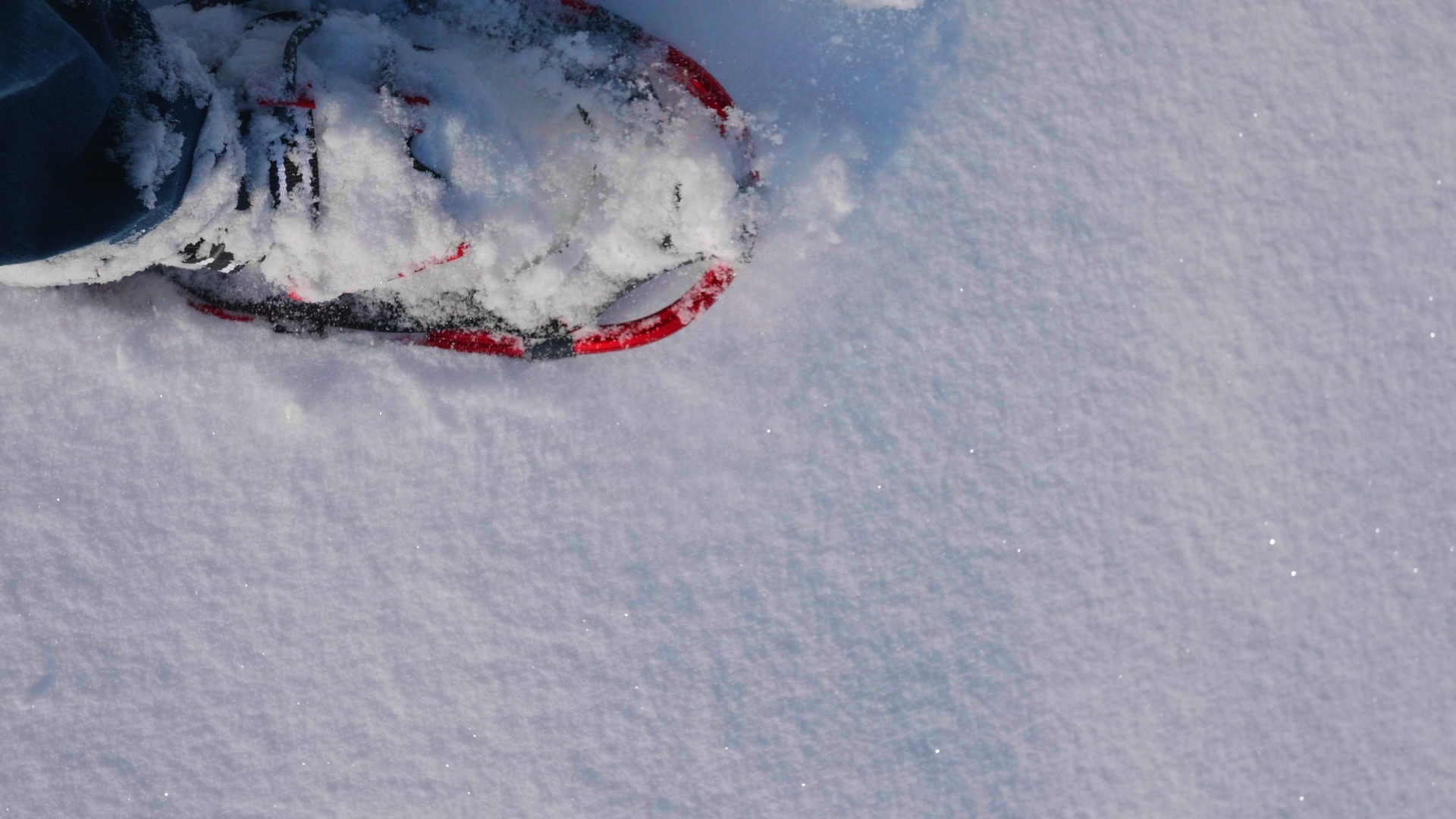 The video should be as clean as you can get it.  The frame rate at 24FPS with the shutter speed set to 50.  As low an ISO as possible to keep noise from messing with the image.  Then as steady and long a shot as is manageable.  Then in the edit, I always do a few things to make it pop just a bit more.

ASMR Tips: On a phone, I’d pick some look that isn’t too saturated with color.

Then in post-production, I have more room to play with the colors and chroma (light v. dark).  I choose a color grade that matches the scene but also looks somewhat cinematic.  I do this in Davinci Resolve (FREE Version is avaliable).

So there you have it!  These are the ASMR tips I follow when shooting a video like a snowshoe ASMR video.

Quick Recap of the ASMR Tips:

Check it out and my process.  Plus, the place I shot this is beautiful.  I picked a good place to get long shots.